Why Are Kitchen Fires So Common?

Next to the Great Fire of London, the Grenfell Tower fire ranked as one of the most tragic disasters in recent history in the UK.

On the morning of 14 June 2017, a fire broke out on the twenty-four-story tower, killing at least 70 people and injuring hundreds.

For the longest time, the fingers pointed at the external insulation and cladding, which caused the fire and smoke to spread rapidly across various floors. When tested, the insulation, particularly, was combustible. It also created a chimney effect, which allowed the flames to enter the cavity of the cladding and go in different directions unhindered.

Some also blamed the lack of easy access to the exit points, which could have saved more lives. The fire was so huge and high and complicated that it took at least 200 firefighters and the next day to get it under control.

Many people don’t know how the fire started: a malfunctioned fridge-freezer on the fourth floor. Experts believed that this common appliance was overheated.

Sadly, kitchen fires, especially those that involved appliances that use a lot of electricity, are not uncommon.

According to the Home Office, emergency services responded to over 35,000 home fires from 2019 to 2020. At least 285 people died because of these incidents.

The majority of the cases are accidental, but a lot began in the kitchen. In fact, cooking appliances accounted for almost half of these house fires. That’s at least 12,000 destroyed properties.

What makes kitchen fires so common? The following could be the reasons:

One of the most common explanations for kitchen fires is overheating. This happens when the temperature in an electrical circuit rises significantly that the appliance can explode or catch fire. Manufacturing flaws, stripped wires, circuit faults, and electrical surges can increase the risk of overheating.

Usually, appliances like ovens, microwaves, air-conditioning units, and refrigerators are prone to overheating. First, they consume massive amounts of energy to function. Second, they are likely to remain plugged in 24/7.

Touching the appliance alone cannot immediately tell someone that it is overheating. They need to look for other signs, such as discolored outlets, broken plugs, frayed cords, and smoke.

To minimize kitchen fires because of overheating, experts suggest using dedicated outlets for appliances the generate a lot of heat. Homeowners need to forget about fixing broken wires. They need to be replaced.

They can also install a ground-fault circuit interrupter (GCFI), which can shut down electricity in case of a ground fault. This is ideal in places where appliances can get in contact with water, such as in the kitchen. 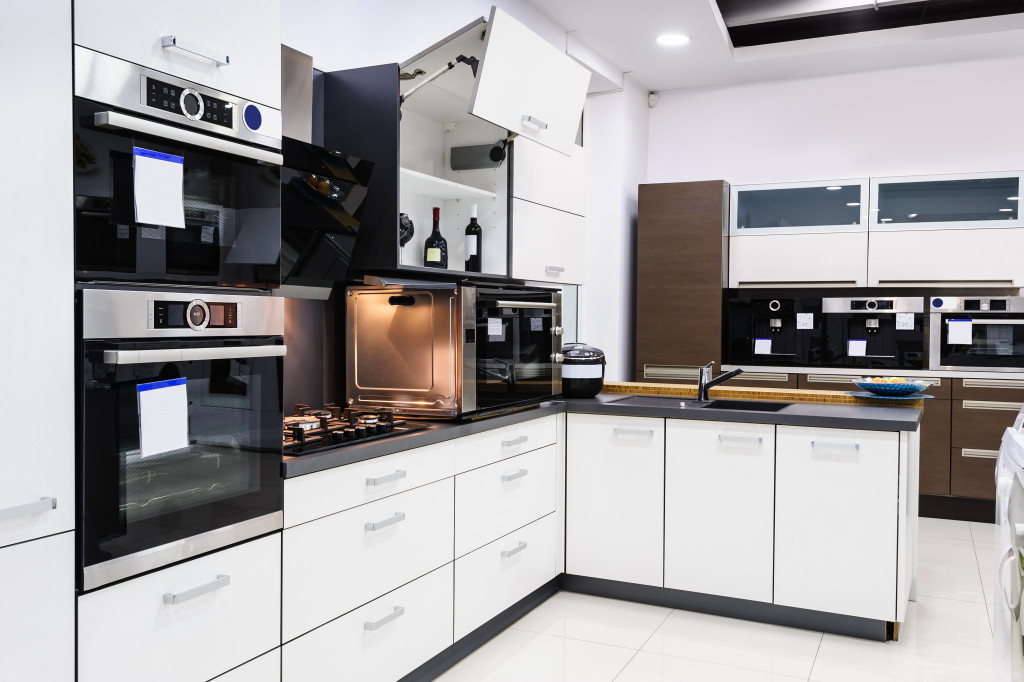 When it comes to overheating, there’s more to overheating that can cause a fire. The stovetop, for example, can lead to a grease fire.

Both oil, fat, and lard can generate a lot of heat, but they have a certain smoke threshold (smoking point). When the heat is above that, however, it could create fire.

Worse, some people add water in the hopes of killing it. But water only sinks at the bottom and brings grease at the top, so the risks of fire only increase.

Inside the oven, the drip from the batter can drop below. If the insides are not properly cleaned, the leftover food can also ignite the appliance.

According to statistics, over 65 percent of cooking fires occurred because of the ignition of cooking materials and food. The rest was because of grease.

The best way to reduce the chances of fires, experts suggest oven cleaning at least once every quarter or half a year. Doing so can also help the household money since the appliance becomes more energy-efficient.

Many things can distract a home cook: work, children, and even their exhaustion or stress. Thus, they end up leaving both the food and the equipment unattended.

Doing so, though, can be dangerous since the appliances can overheat. As mentioned, food with too much fat and oil can cause grease fires.

In the United States, the National Fire Protection Association (NFPA) revealed that unattended equipment could be a factor for over 30 percent of home cooking fires and at least 50 percent of associated deaths.

Although kitchen fires are one of the leading causes of house fires, they are also preventable in many ways. Upgrading to energy-efficient appliances, pulling the plug when not in use, checking for any signs of faulty wiring or overheating, and, most of all, cleaning the equipment can all count towards increasing safety in the home.